A former middle school turned brewery and entertainment venue is helping to revive the west Huntsville neighborhood and create a ripple effect across other parts of the city. 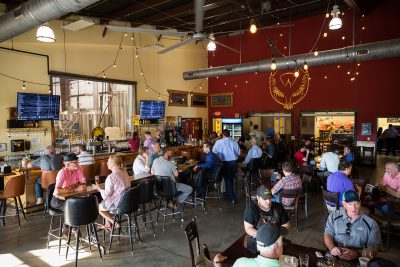 With 19 tenants and nearly 90 percent occupancy, Campus No. 805 is commanding attention among beer enthusiasts in Alabama, Tennessee and Georgia. The facility is also gaining recognition outside the region and inspiring new growth along the west Huntsville corridor.

“When we initially started, we knew this was going to be something special for the west Huntsville community, but really did not understand the impact it would have on not only Huntsville, but Alabama as well,” said spokeswoman Madison Kilpatrick.

From 1951 to 2009, the site of Campus No. 805 educated thousands of local students, first as S.R. Butler High School and later as Stone Middle School. In 2014, developer Randy Schrimsher bought the Clinton Avenue property and quickly began renovating it as Campus No. 805 – a name that pays homage to the 35805 zip code.

Yellowhammer Brewing and Straight to Ale were the first tenants to sign on at the site. Since launching at Campus No. 805 in December 2015, Yellowhammer co-founder Ethan Couch said the brewery has had a good mix of tourism and local support due in part to the Downtown Huntsville Craft Beer Trail. 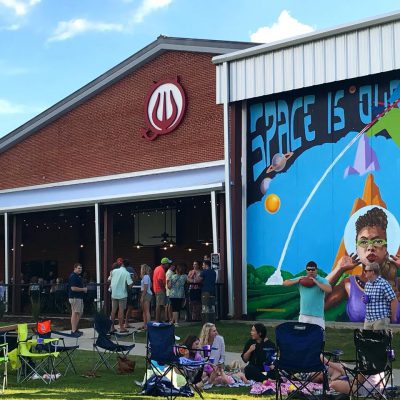 “Locals know they can come to the campus and find fun stuff to do, and if people are in from out of town, they are pleasantly surprised Huntsville has such a vibrant brewery scene,” he said. “And the entertainment is still evolving.”

Straight to Ale has expanded their taproom into different areas of the school, giving each space its own unique vibe.

“We have been amazed at the growth of our brand over the years, and especially since opening the Campus 805 location,” said co-founder Dan Perry. “Since we got our triple license at the new location, it allows us to also make wine, cider, mead and distilled spirits here on-site. Our customers seem to especially enjoy the addition of all of our craft cocktails made with our Shelta Cavern Spirits.”

While Campus No. 805 may be a craft beer mecca for some, breweries are not the only businesses operating at the project. In addition to Yellowhammer and Straight to Ale, the development is home to Lone Goose Saloon, Civil Axe Throwing, Spirited Art, Wish You Were Beer, Fringe and other tenants. 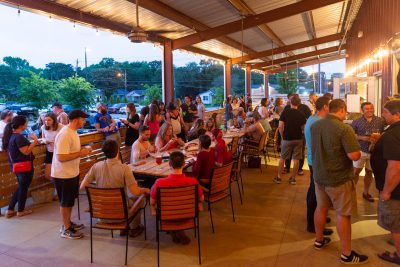 Arcadia Studio, a private tattoo shop, has done well at Campus No. 805 since Huntsville artist Leah Farrow opened it in January 2017.

“I do really like how my clients can get food on campus and soon coffee, when Offbeat Coffee Studio opens,” Farrow said. “There are also things to do for people who come with them, which I like. My business hasn’t changed dramatically, but I do think I’ll be there long-term because I love the location.”

Kilpatrick said the Stone Event Center inside Campus No. 805 is creating packages to promote nationwide through the Alabama Tourism Department and Huntsville/Madison County Convention & Visitors Bureau. This will attract conferences, seminars and long-term businesses to the campus and community at large.

Diversifying will also ensure the campus remains relevant to visitors of all kinds, Kilpatrick said. 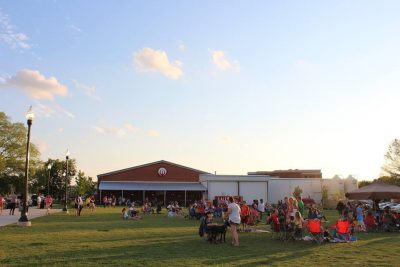 As Investment Communities of Nashville works to revitalize west Huntsville with new homes, Couch believes facilities like Campus No. 805, Lowe Mill ARTS & Entertainment and the Huntsville West business incubator will continue to expand.

Couch said he would love to see a boutique hotel open nearby to attract more out-of-town guests and convince new businesses to invest in the area.

“Governors Drive and Clinton Avenue were built for this kind of growth years ago, and the city has done a great job incorporating this section of town into their long-range plans,” he said. “As people get more familiar with the area, it will only continue to grow.”

About the Author: Lucy DeButy

Lucy Berry DeButy lives in Decatur, Alabama with her husband and 2-year-old son. Although a wine lover at heart, Lucy has been covering Alabama's craft beer subculture for years as both a reporter and freelance writer. Follow her latest antics on Instagram at @lucydebuty.